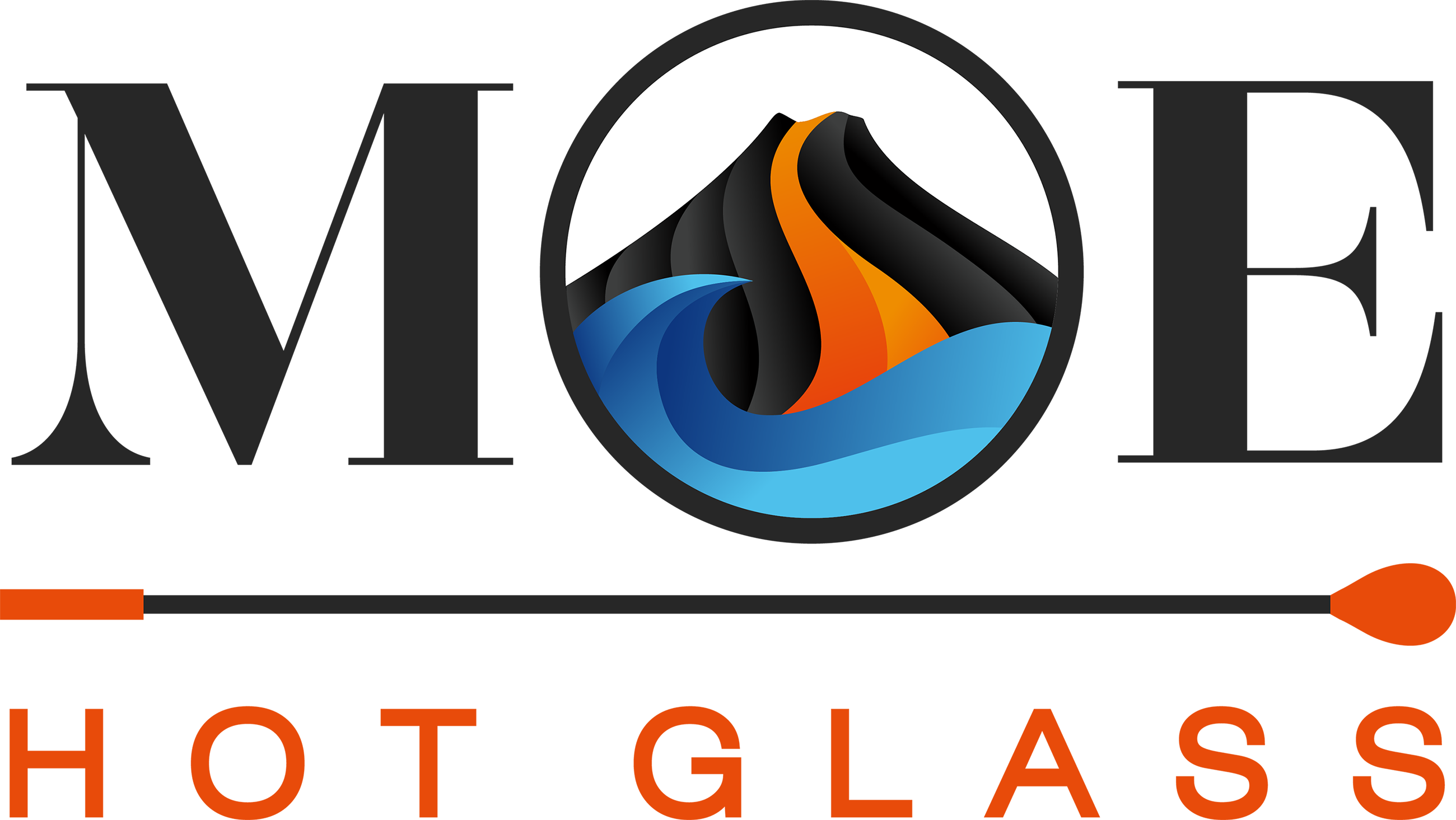 “I fell in love with glass as a medium to express my love and connection to nature. When I approach glass in its fluid state, I feel as if this connection is enhanced. Tuning into this sacred space, allows me to understand the link between the earth elements and my own.

Glass is not only a material, it is matter, living its own life, a powerful medium of communication. It is both beautiful and treacherous. It lends itself to metaphor because it can imitate some things, such as Water, Magma, Stone and suggests other things like Air and Light. It is poetry.

The ephemeral changing colors and movement of magma and moving water are properties of the glass itself. It can be liquid, viscous, transparent, opaque, shiny, solid, adaptable, flowing and versatile. This makes it the perfect material to express the dynamic raw and liberating energy revealed in the Aina (land) of Hawaii”

“One of the most powerful aspects of glass is its ability to hold light in its mass in a way similar to that which energy/spirit is held in the mass of the human body. “

Daniel Moe was born in St. Paul, Minnesota in 1967. He received his Fine Arts degree in Hot Glass from The University of Wisconsin in 1991.

Being drawn by a powerful calling from the Big Island of Hawaii in 1999 was a key factor to further expand his reverence to Mother Earth with his creative glass work. He currently lives and works in Puna, where he gets his inspiration from living close to Pele, the Nature force of the volcano Kilauea which is located just a few miles away from his home/studio. The Puna region is also known for its dramatic ocean waters. Waves eternally and passionately crash on the breathtaking lava cliffs moving Daniel to give birth to his ocean wave series.

Daniel finds tremendous support in integrating his creative energy through the daily practice of yoga, which he claims keeps him disciplined, young and excited about life. In 2018, Daniel lost his son after a very traumatic birth. A major life quaking event that changed the way he looks and experiences life in a very dramatic way.

He gives thanks for the positive impact of his brothers from the Mankind Project and the extraordinary support and love from his wife. All of these being pivotal to the ongoing transformation and maturity of his glass work. 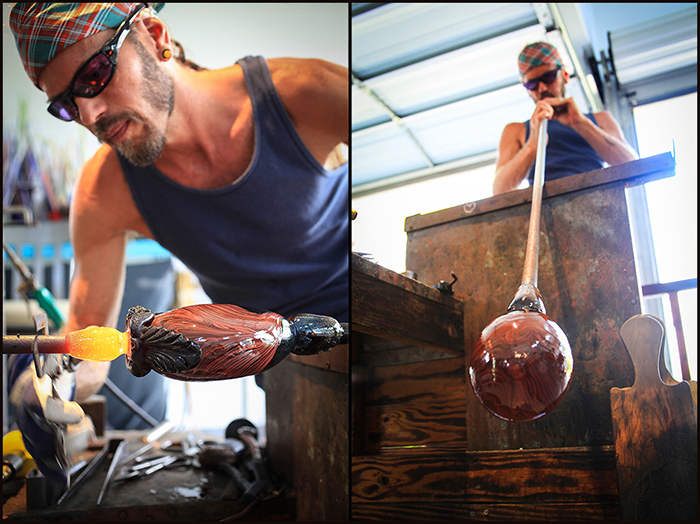 Although Nature is what inspires him, Daniel is constantly pushing his own comfort zone by learning/assisting with other glass artists and by taking part in stimulating glass programs at Pilchuck School . His main influences and some of the people who he has worked with are Karen Willenbrink, Benjamin Moore, Martin Blank, Pino Signoretto, Jacqueline Spiro, Jan Erick Ritzman, Lino Tagliapietra, Ed & Elena Schmidd, William Morris and others. 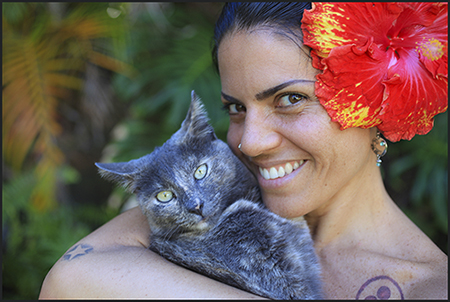 Mādhava was born in Caracas, Venezuela in 1977. She lived there until 2001 when she moved to the United States. Residing in Hawaii since 2008, she works as a Massage Therapist, Photographer and creative partner  at Moe Hot Glass. There, Mādhava is the heart that keeps everything running behind the scenes.  Her contribution to the team extends to web design, photography, writing, bookkeeping, inventory keeper and marketing. She is also the primary aesthetic consultant whenever she walks into the studio during the process of the creation of a new glass art piece. She is keen with colors, ideas and forms, and is intimately involved in the glass designs. 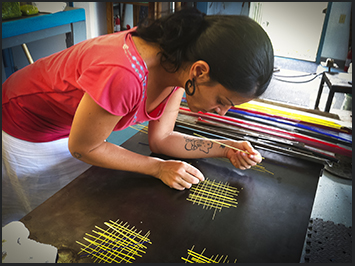 Mādhava has many virtues including the ability to recognize what is needed in the moment, and spontaneously developing effective strategies to achieve the desired outcome. She is very focused, determined, and rarely interrupts her own process until she has reached it’s completion.

“Being part of this team has helped me to breakthrough fixed ideas of who I am, and what I am able and capable to give. I am artist in many ways, I love colors and my mind works in frames, like photographs. Being in the studio, witnessing the art process from the beginning until the end, feeds my soul. The color transformation process of the glass from bright red to any color combination, the alchemy, the beauty of creation, the team work. Living on this island and witnessing the raw forces of nature and the process in the studio, very much alike processes.” 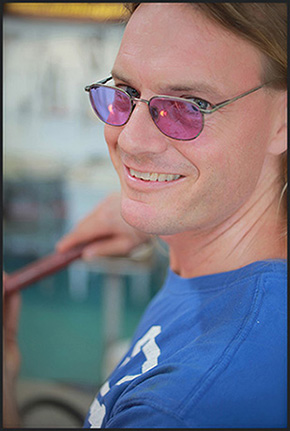 Kimball was born in Stamford CT in 1967.

Inspiration from the landscape, fantastic museums and galleries was a priceless influence as he was painting and studying photography. Growing up in a family with talented artists, his curiosity naturally led him to focus on art as a career. While working for a sculptor during the summer of 1987 in France, he became aware that glass would be his medium of choice. After receiving a BFA in glass sculpture from Alfred University 1989, he worked, trained and apprenticed with many great glass artists.

He moved to Hawaii in 2004 where he makes his glass and sculptures to this day. 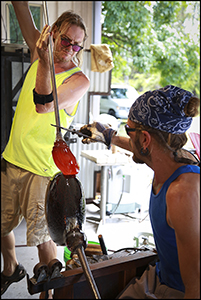 “I met Daniel Moe soon after arriving on the island and since then, I have enjoyed assisting Daniel in the studio . Moe Hot Glass creates many interesting objects of art, utilizing a variety of my favorite glass blowing techniques. The focused and skilled teamwork is impressive, putting fun and positive energy into this challenging process” 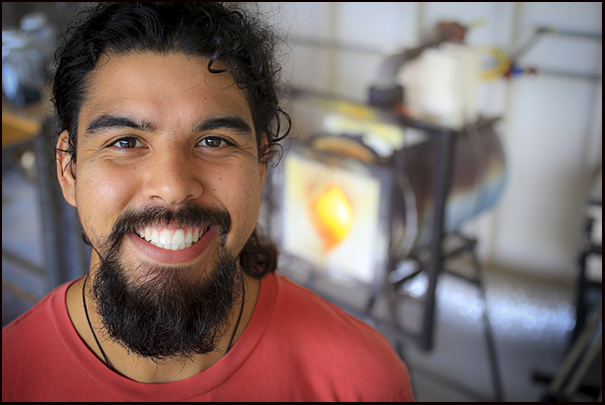 Julius was born in Lima, Peru in 1991 and has been living in Hawaii from a young age. He loves spending time in nature, surfing, skating, diving, as well cross country running and martial arts. In 2013, Julius graduated from University of Hawaii Manoa with a degree in Plant Biotechnology.

Julius has been a member of Moe Hot Glass for many years. He was fortunate enough to discover glassblowing on his last semester, spending almost every waking hour at the shop. The pure excitement of working with a medium so responsive, fluid, complex and simple, soon blossomed into passion. A fire that would keep burning on. 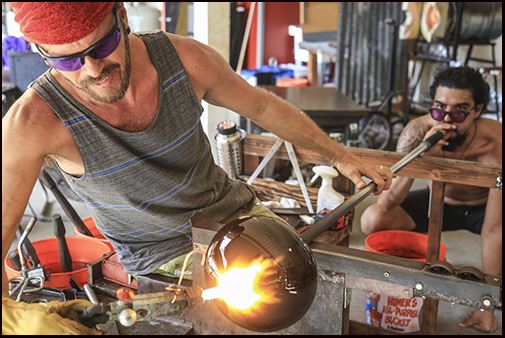 “My passion was able to be expressed again in 2017 when I met and was able to work with Daniel Moe. Assisting in the creation of fine art reflecting the beauty of nature has been a mind expanding process of refinement and awareness. Humbled by the vast variables to keep track of, inspired by the endless possibilities. Grateful for the opportunity, supported by a strong team, looking forward to creations to come.” 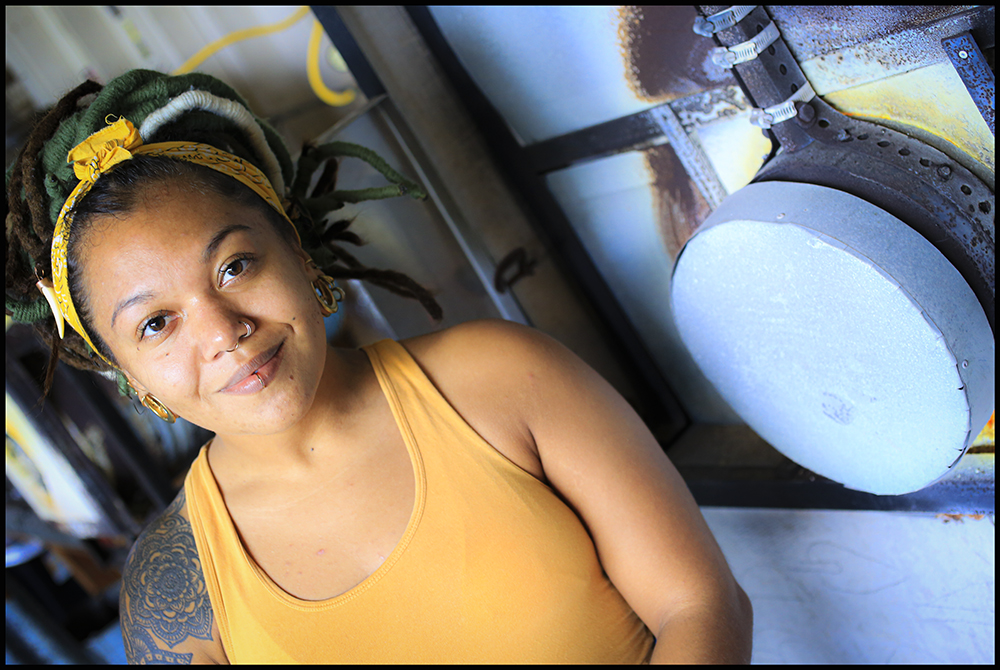 Juli is a 90’s baby from the heart of Texas. She moved to Hawaii in 2017 to get some new experiences and stumbled upon what would be the greatest love of her life. She has been blowing glass  since 2018 and has worked in several different shops since.
Juli has been working at Moe Hot Glass since 2021. She is deeply dedicated to being a part of the continued success of Moe Hot Glass and it’s team. She has strong yet feminine presence with a keen attention to detail and a great sense of humor that we greatly appreciate.

“Being an assistant in Daniel’s shop was quite literally, a dream come true. Working in this shop has opened me to new perspectives and has shown me what is possible when following my passions. There’s an energy that erupts when doing what you love while surrounded by people that share your passions and I feel that energy every day working with this team. I hope everyone gets a chance to experience that in their lifetime.” 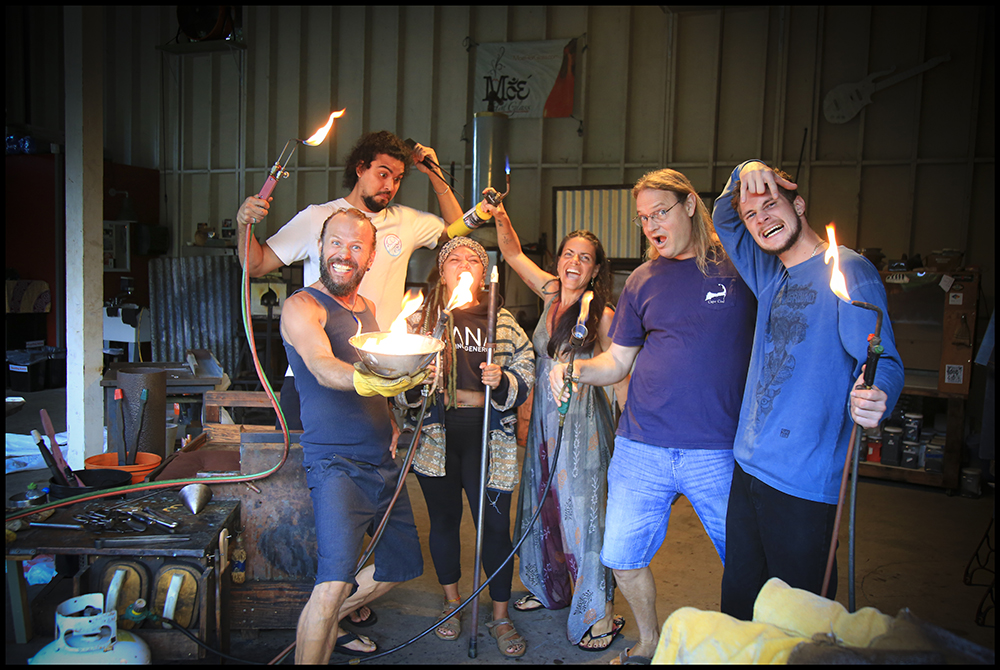 About us – Where we are – Our purpose